Banks Violette is a prolific and renowned New York based conceptual artist emphasizing a specific beauty drawn from the darker recesses of the human condition. Themes of suicide, violence and ritualistic murder paired with re-purposed structures or objects, often with a (counter)cultural reference, form the basis for the sleek and elegant sophistication of his work.
Read more »
at 9:00 AM 0 comments

White on White, a new trend or a thing of the past.  One can refer back to Robert Rauschenberg’s large body of minimalist white work and possible argue that this is a re-cycling of an older concept in art.  Contemporary artists seem to be coming back to  creating this seemingly simple art.


Could anyone make similar work  or are these intentionally crafted by a skilled artist… so skilled that they are able to make a very complex concept seem effortless.
Read more »
at 9:00 AM 0 comments

PROFILE | Douglas Kolk | Where is my Mind?

Douglas Kolk is an American artist best known for his strange drawings and collages which fill the viewer with a strange sort of discontent and latent threat despite a lack of outright violence. Some of his works read like narratives, while some of his more recent collages are more like jumbled specklings of an idea that create a whole. But the trendy teenagers and magazine models he draws from all reflect an uneasy state of mind, a majority of his work commenting on the lost innocence of children as we pass into adulthood and the artist's own musings on dying and death.

While researching body casting I happened upon the work of Jamie McCartney. At first glance I saw an interesting array of dips and protrusions. With a more careful eye, I recognized the ever so familiar image of the female anatomy. I was shocked at how detailed a vagina could be replicated into plaster, at how many of them were staring me in the face, and how different each is.
. 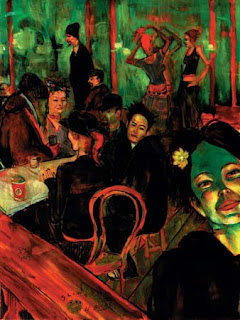 David Choe, Slow Jams, 1997
David Choe is an artist from Los Angeles with a large (and still growing) base in graffiti but over the past years Choe has expanded to large galleries such as Johnathan Levine and Lazarides in London. Choe is considered a commercially viable artist, yet he still maintains his gritty style and sexually charged imagery.

PROFILE | KAWS | The Line Between Art and Commercialism

Kaws is a New York based Contemporary artist mainly working in the acrylic and sculptural medium. A majority of his work is cartoon inspired, characterized by brightly colored hues, and his signature x’d out eyes and skulls. Kaws often blurs the lines between what is considered commercial and what is considered a fine art.
Read more »
at 9:00 AM 0 comments

Gottfried Helnwein, an artist whose work is known as Hyper -Realism (surpassing super realism), often mixes metaphorical irony into all of his work. Whether it be complex or as simple as letting the viewers debate if the painting is truly a painting or rather more, a photograph, showing the naive complex among most of the viewers. Or whether he mixes in a deeper meaning as he does in the painting Epiphany III, which is one of manythat he considers a memorial to the holocaust.


﻿﻿﻿﻿﻿
﻿﻿﻿﻿﻿
Junko Mizuno is a commercial artist who has not only seen her work in galleries across the globe, she has also been published in art anthologies, mass-produced prints by the millions, has written and illustrated a slew of graphic novels, and even on her own line of condoms.  Kawaii, or cute, design motifs are an everyday part of life in Japan, but with the surge in popularity of such brands as Tokidoki and Gwen Stefani's Harajuku Lovers line of products which use similar bright colors and Asian-inspired motifs, it has paved the way for Japanese artists like Mizuno to gain recognition in the West. At first glance, Mizuno's work may remind the viewer of the ever-popular characters of anime and manga, the comic and cartoon world of doe-eyed schoolgirls with ill-fitting sailor uniforms  made popular by Japan, her country of origin.  However, there is something much more sinister in her art, an overt sexuality that mingles with occult overtones.  This combination of "childish sweetness with blood and terror," as described by Mizuno's artist profile on Kidrobot, has become a major sub-genre in anime and manga today.


Margaret Kilgallen was a contemporary painter and installation artist, she was influence by a combination of imagery and text of the Mexican and Southwestern art she saw around her neighborhood in the Mission District of California. Kilgallen worked on a large scale in her installations utilizing the entire space of the gallery. Kilgallen also painted directly on the wall, unlike other gallery artists, which made a lot of her work only temporary.

PROFILE | Roxy Paine | Continuing the Ever Popular Fight of Man vs. Nature 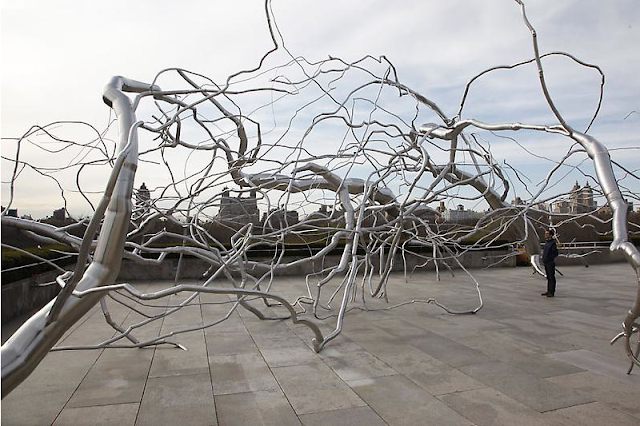 Roxy Paine is an American artist creating natural looking sculptures, some of which are fungi and trees, using unnatural and man-made elements. His gallery page shows many of his current sculptures including, his metal trees. The main theme in his sculptures is questioning the relationship between humans and nature. His sculptural gardens of plants and fungi look at the idea that man tries to control nature. He then shows that nature resists this conformity by placing his forms in unnatural settings. Paine’s trees, or Dendroids, created with stainless steel and placed in their natural environment, display nature’s chaotic side.
Read more »
at 11:00 AM 1 comments

A visual pattern has emerged amongst contemporary painters of brightly colored expressive watercolors depicting faces, usually female, in a very particular style.  New York artist Marion Bolognesi's series For Colored Girls is a perfect example of this trend with a wide unnatural color pallet, subtractive composition, use of white negative space, and an expressive embrace of the paint's flowing liquid nature.

Contemporary artist Ron Mueck hails from Melbourne, Australia, and specializes in photo-realistic sculptures of humans.  He started his career making life like models of people to photograph for advertisements, which is where he picked up his sculpting knowledge.  His impeccable attention for details shows in his work, and provides for stunning creations.

﻿﻿﻿﻿
﻿﻿﻿﻿
Cai Guo-Qiang is a multi-styled artist who is well known for his fireworks and exploding artwork. His explosions are of massive scale, from paper panels to fireworks in the sky. He is known as a 'happy-accident' artist. Cai allows for his artwork to convey the beauty in life's unpredictable nature and the inevitable fallout that comes from living to the fullest.

The debate of kitsch, versus camp, versus avant garde made me take a second look at an art form I have a high respect for, tattooing.  Tattooing was once an underground art form.  The mainstream did not accept the tattoo culture, much less appreciate its artists.


In Hawaii during World War II, Norman "Sailor Jerry" Collins perfected what we know call the "traditional" style of tattooing.  Collin's clients were sailors about to face war, and possibly death, and Collin's tattoos came to embody this new "devil may care" attitude, and became iconic symbols of this tumultuous period in american history.

Rona Pondick, Fox, Stainless steel, 1998–99
Contemporary artists, Rona Pondick, has been very successful in making the physicality of her sculptural work have a great psychological impact on the viewer. Through her success she has turned into one of the most accomplished sculptors of her generation.

Pondick’s interesting use of material engages the viewer and entices them to question the purpose of such a fictional character, which is still somewhat believable from the way the material is handled. Pondick also seems to make a reference to mythology in most of her pieces which also engages the viewer and leaves wonder. Some of her most successful sculptures are shown in her website.

Hills Snyder is a Texas native, and an American contemporary artist. His artwork incorporates history and influences of popular culture into the works. Many of his artistic expressions rely on puns to get the meaning out to the public. With simple imagery and iconic images, Hills Snyder consistently incorporates wit with tendencies of added dark humor. The artist explores several types of media that have become necessities, and large scale artworks provide added character allowing for easier interpretations. Of the artist’s works within the past several years, Out of Breath and Wild and Site have become conversational pieces to reminisce about how the culture is part of the artist’s perspective on certain issues.


In his work of the Out of Breath and Wild, the acrylic sheet layout of cups with handles imagery becomes arranged in certain ways that the Eiffel Tower is the dominate image providing bold ideas. There is obvious integration of political ideas interwoven into the thinking process that uniquely creates this artwork. Since Hills Snyder tends to involve politics along with his ideas, the Eiffel Tower becomes the 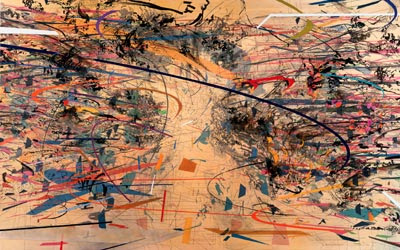 Dispersion, at first glance, looks confusing and almost startling. If seen in real life it may be more startling than confusing because of its large size of ninety by one hundred and forty-four inches. When I first turned to this picture in my "Art and Today" textbook I was drawn to the colors and separation in the painting , which reminded me of a map. The lines drawn across the whole painting could be seen as an exchange of some sort. Much of her art work has the same intriguing look.
Read more »
at 10:59 AM 1 comments