Fractals are radiating geometric shapes that repeat in a sequential order.  No matter how far you magnify the image they will hypothetically have infinite repeating forms.  The idea of fractals was actually thought up in the 17th century by Karl Weierstrass but they didn't get named until 1975.  The term fractal is used when a shape is not describable in traditional Euclidean geometry and is self-similar or repeating.  To produce a fractal in mathematics is complicated; it has to do with an equation undergoing iteration and then a form of feedback is created and plotted on a 3d map.  Luckily there are many programs that can do it for us.  Fractals can also be found in nature like when frost crystals gather on glass.  The production of fractals as an art form lies somewhere in the middle ground of nature and mathematics and has become an interesting new form of artistic expression.

There are many different techniques of creating fractals.  "Orbits fractals" are defined by a recurrence relation at every point so that no matter how closely you look at them they will always look the same.  An example of this would be a "Mandelbrot set" where 2d vector fields are made with an escape-time formula that create different shapes based on calculated times for each color and space.  Other forms of fractals can be created by iterated function systems, L- systems, strange attractors, and many other processes.  These complicated mathematical equations are very difficult if not impossible for a human to do by themselves but there is software that has all the formulas already programmed in and makes creating fractals very easy.  It takes the math out of the equation but makes it simple to create beautiful works.

The chaos that is able to be achieved in fractals is what makes them so interesting.  The rapid multiplication of shapes makes it possible to create new forms that one wouldn't ordinarily think of.  If someone could enter an artistic medium with no preconceived notions of a piece or how it is going to look or be perceived in the end, magic can happen.  On the other hand, if there is no thought put into any aspect of the art and it is completely random/ computer generated is it still art?  Maybe, but I have to question the validity of the piece and the artist themselves. It is interesting to me that most of the fractals I found where not labeled in any way.  Some had titles but very few had any artist name or ownership of any form. 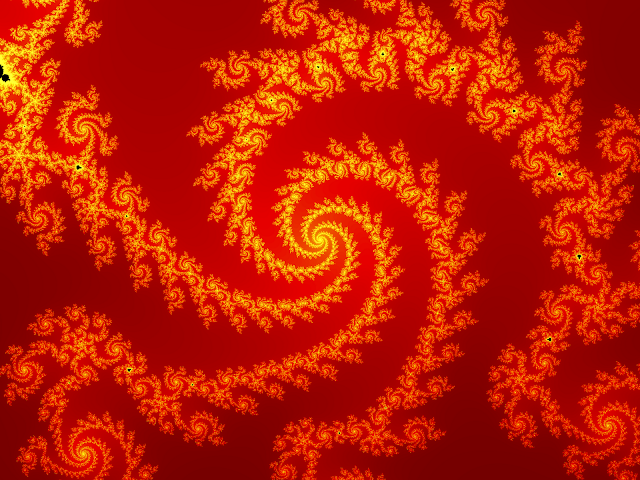 Another point is that fractals are not seen as high art.  You don't see fractals on gallery walls and I don't think someone would purchase a print out for very much money, they are free and all over the internet.  I feel the randomness and improvisation in the creative process makes these pieces quite pleasant to look at but also gives people the freedom of sharing their work without feeling jaded out of their rightful dues. If I plug a bunch of random numbers and colors into a generator and get something that is interesting to look at I would love to share it with the world but I wouldn't really call it an original art piece and expect reparations for it.  This middle ground between math, art and randomness is interesting to me and the forms that are created are mesmerizing.  I feel fractals are remarkable to look at and very visually pleasing, but I have a hard time seeing them as a fine art when then can be created at will with simple programs.  That being said, I think everyone should try to make a fractal for themselves!