He paints, he writes, he sings; he is the front man for the sensational band INCUBUS, and not to mention he's easy on the eyes. Brandon Boyd at just the age of 35 has accomplished more things than some people can only imagine. Selling out stadiums for almost two decades, Grammy nominations, and multi-platinum selling albums. I think it is safe to say that Brandon Boyd has conquered the music world. But don't let the titles that come along with the name Brandon Boyd fool you. He's not your average everyday drugged up, heading to rehab for the sixth time rock star.

White Fluffy Clouds is a book of Boyd's personal thoughts, paintings, poems, photos, and insights. This book was written in 2003 while Brandon Boyd and his band were touring the world. Looking through the book you get an idea of the type of person and artist Brandon Boyd is. White Fluffy Clouds is constructed in a way that most published books are not. A good portion of the text is handwritten and photo copied, while the rest is typed on a typewriter with scratch outs, mess ups, and side notes. It is almost like he is giving us a sneak peak of what his journal looks like.

Brandon Boyd's artwork style is really loose and somewhat imaginative. The drawings and paintings chosen for White Fluffy Clouds are graffiti like and animated with a little twist of the extra terrestrial. On the bottom portion on the cover of the book you have one of the more popular drawings, which is one of my favorites as well. The girl that he draws here is repeated several times throughout the book. Each time she is seen she seems to be in a different state of mind and has a different hair style. Sometimes she is happy (shown above), sometimes sad, and sometimes with a lip ring about to make out with another girl. It makes me wonder who this girl is and why does he continue to draw her. As I look through Boyd's paintings in his book I notice that my eye never focuses on one thing in that particular painting. He does a very good job of keeping my eye moving throughout the page. 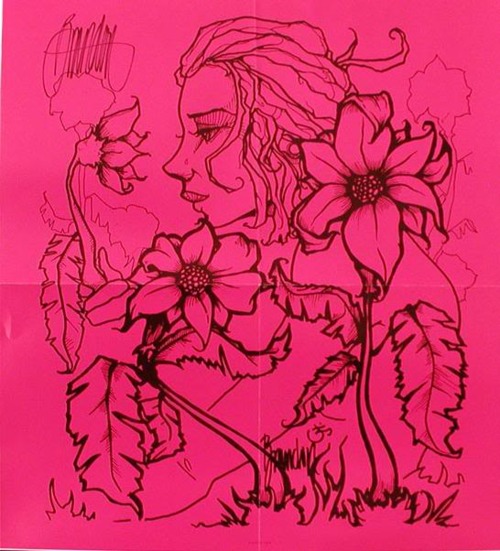 "Someone will inevitably find something wrong in almost everything. So do what it is that you do best and remember to have enough tolerance for two." 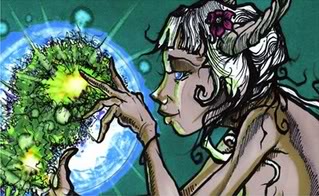 ﻿I found the text in White Fluffy Clouds very interesting. I was expecting the text to be lyrics to Brandon Boyd's hit songs but I was absolutely wrong. The text in this book is Boyd's most inner thoughts and feelings about society, people, and stories of his "overactive imagination". In reading this book what you don't get is the story of Brandon Boyd's life, or how he got started in music, or how he met his fellow band members. What you do get is stories of how he was always scared to use the bathroom alone when he was a kid because he thought the big bad wolf was going to come up out of the toilet and have his way with him. He states that he paid his little brother to come talk to him in the bathroom on several occasions so he wouldn't be alone. We all know that if anything is going to come and get you, they will come and get you when you are alone. Most of Brandon Boyd's writings are him just rambling on in his own made up words. Don't get the last sentence confused with some ego-centric man who likes the sound of his own voice. Brandon Boyd is simply trying to inform people of how shitty (excuse my language) this world can be. He talks about how we are taught to be afraid of everything and calls our country "a nation of phobics". I respect that because he is speaking truly from his heart and not just telling people things they want to hear. Most of his rambling rampages are things people don't seem to think about or are scared to bring up. Although, sometimes he tends to take it too far and perhaps into an imaginary state of mind. In reading this book I get the sense that Brandon Boyd is one of those people that tells a good energized, funny, but serious all at the same time story. 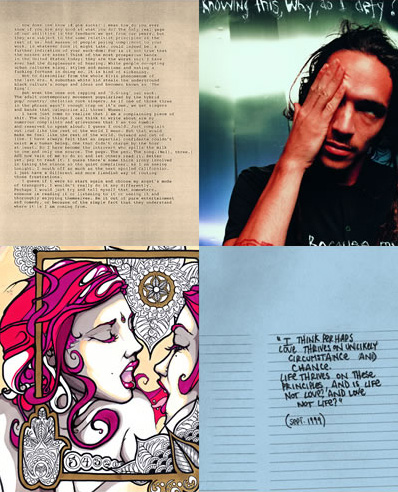 Perhaps you might think I am a little bias towards Brandon Boyd. I can't help it though I have been a fan of his since I was in 8th grade and the man can do no wrong in my eyes. I admire the fact that every word he says, sings, or writes is carefully chosen in a way that no one will be able to twist what he trying to say. Boyd's messages are simple in an elaborate way. The way he speaks makes a bell go off in my brain. Here are a few of his lyrics that I live by, "Don't let the world bring you down" and "Don't let life pass you by."