Tucked away behind a little house off of 1st and Monroe street is the grayDUCK gallery in Austin, Texas.  The current exhibit is based on Wapatui, which is an alcoholic drink in the midwest similar to trash can punch.  In this Wapatui, grayDUCK invited a mix of fifteen different artists from Austin and all over the United States to give gallery viewers a visual variety that packs a punch at an affordable price. 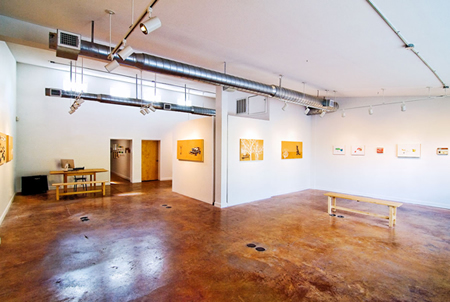 Although grayDUCK is a small gallery, the exterior makes the establishment look like it is only one room.  Once inside, there is a large front room, with a section of wall separating the area into two sections and a small back room.  The gallery is an older building with open ducts, rust stained concrete that has long running cracks from the shifting foundation, moderately high ceilings, and plain white walls.  There are a few single pane windows, and small overhead halogen lights to give the gallery a well balanced mixture of natural and synthetic lighting.
In the front room of the gallery, the artwork was placed symmetrically, at eye level, was sometimes but not always consistently grouped with the same artist.  Most of the artwork was very small and two dimensional.  This created an intimate exhibition since it required the viewer to lean in very closely and examine the detail of each piece.  Despite the theme of the exhibition being a mixture, the artworks seemed to host themes of narratives and odes.

One of the many artists in the front section was Amy Rice, a Minneapolis native printmaker and mixed media artist whose series focused on pleasant childhood memories.  Rice often had illegible script writing on her pieces to give the sense of private memories written down in a journal that are coming alive on the artwork.

Another artist in the front section was Jason Webb, who featured paintings of places or objects that held a past.  Webb captured light, texture, and detail in his paintings beautifully, and complimented the many different styles presented in the gallery.

Around the corner was the second section of the gallery.  It was a little more narrow, and felt a little like corridor with its nooks and crannies.  Most of the pieces in the second section were small, three dimensional, found objects, and mixed media.

In the second section was Emily E. Galusha, who did a series of gun illustrations and bird drawings on brown paper boxes, and framed vintage sewing patterns.  Galusha’s artwork is much like Rice’s due to her handgun series being a focus on childhood memories of shooting tin cans with her great uncle.

Cathie Joy Young’s series was placed in the same section as Galusha’s, giving the corridor a variety.  Young has a line oriented and collage like style that seems to resemble european folk art.  Young arranges stories to create “borrowed” memories, and only comes upon them by the process of making her art.

The back room seemed to contrast the entire front area of the gallery.  The doorway was small, and would only allow one person at a time to enter.  The room was built similarly to the main area, but with an aging brick wall on the left, and less lighting. The room had one single pane window on the wall covered with blinds and a tiny skylight that shined a small amount of natural light in the room.  The majority of the room was lit by dim, motion sensor halogen lights.  There were larger pieces placed in the back, but the pieces were also a little cluttered, with some of the pieces being stacked with price tags attached, placed upon shelves, and racks.  The back room felt disconnected to the gallery and seemed to be set up more like a shop.

Overall the exhibition was well curated and organized with the Wapatui of intimate narrative art.  The group of artists were chosen well in their diversity of styles.  The gallery seemed to favor two dimensional art over three dimensional in this exhibition, but the variety of mediums and styles is what made the Wapatui successful.