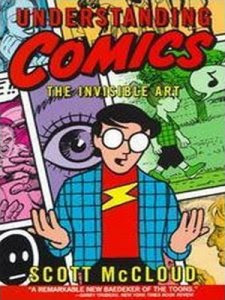 One medium that has been touched on quite a bit since this blog has been started is the art form, trend and review of the comic book. But I find it strange yet relieving that it is talked about as if it is already this cultural fad when really today it seems it is more taboo to be twenty plus years old and still reading comics. Scott McCloud’s book Understanding Comics the invisible art asks the question “why?” to these social misunderstandings and I believe makes and impenetrable case for why the comic should be held as a high art form.

I was reading this book in an airport not thinking what it might look like to other people for a twenty five year old reading a book with a big red “understanding comics” on the front of it until a gentlemen leaned over and said “I didn’t know there was really a secret to understanding a comic book. Isn’t it pretty self explanatory?”  I said, “It’s more complex than you think.” He just snickered and went back to playing his iphone. I feel this man’s question is a common held ideal of the comic book as much as I want to believe other wise. The comic book is not widely respected.

Scott McCloud touches on this issue in the book, that maybe the comic may not be difficult to understand in most cases but it is certainly complex in the way we understand and perceive it. He calls the comic “sequential art” but goes on to say that its more than just art in a sequential order because of its intricacies in our perception of it. We perceive a passage of time and a time line, much like you would in a movie. As if there is this very real understanding of what has happened in the past and what is going to happen in the future when we can just as easily turn the page and control time on our own. But we do not perceive comics in that way. He argues that the space in between each panel is what gives the comic this passage of time effect he says, “Space does for comics what time does for film.”

But it’s not just the effect of time that makes the comic so involved and intricate. It’s also the images themselves and the relationship they have with text. One cannot be understood without the other in the comic. McCloud tells us that we perceive images instantly but text is something that takes time and knowledge to decode, but even the words are just sequential symbols that compose an image that we register as a word. But what I find so fascinating about this realization and understanding is that we also have to work to decode images much like we do in museums when looking at artwork on gallery walls. We take what meaning we want from it and they may all be different for different people but a comic artist has to work and work hard at evoking a specific feeling for all audiences from the same image and by doing this cleverly with text so as to not be too obvious but still allows the reader the ability to put the puzzle together on her or his own.

Like I said before the comic itself or at least most comics may not be so hard to understand but the concepts of it are very intricate. So intricate that it is extremely easy for a comic artist and writer to mess up a so-called “simple” medium. Scott McCloud unravels the concepts and perceptions of the comic in a purely art historical context, and I feel asks everyone to take time to consider what the comic has to offer.