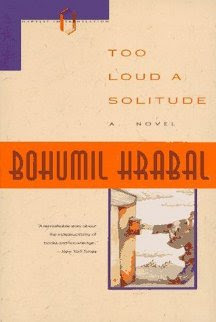 Czechoslovakian writer Bohumil Hrabal narrators the internal stream of a beautiful thoughts and "unwitting wisdom" through his fictional character Hanta in Too Loud a Solitude.  Hanta has been married to his work of hydraulically compacting wastepaper and banned books for thirty-five years in a cold wet stench ridden cellar with his mice companions, it is his love story.

This short novel is an alluring and entertaining sculpture in itself.  Sucked in gradually within the first few pages though run-on sentences full of vital insight of Hanta's life in first person.  His heart and hours are devoted to these books that he compacts day in and day out, he manifests guilt within himself as he feels as if he is murdering precious pieces of literal art and cannot stand how all others overlook their crucial meaning of life.  Hanta treats his bales of paper as sculptures, each one tagged with its own special stamp.  He saves books from genocide, takes them home and lives amongst his extensive installation.
Hanta's reflections and contemplations on his world around him can be easily related to any real artist of any time, no matter if of the early nineteenth century or 2000 on.  He is greatly aware of the world around him placing mundane scenarios into metaphorical language and surreal descriptions we can all tap into. He brings together his the current through what he knows in his everyday life.  Such as the mice he works amongst studying their habits and life style with his. The sewage rats that live below him creating two opposing armies fighting amongst each other over abandon sewage canals and fecal matter is metaphorical for his views on Hitler and the war around him.


He constantly consumes vast amounts of alcohol while off and on the job, but not because he considers himself as an alcoholic but because it "helps him think better".  His staggered hallucinations bring him companionship of Jesus and Lao-tou in which he loves what each one brings him.  He views Jesus as a ladies man, a man of spring, a spiral. While on the other hand Lao is a man of spring, a whole circle, a man content in solitude.


Throughout the book Hanta speaks of how when he retires him and his uncle will buy a hydraulic compress of his own and make millions of bales at ones own pace till his days end. Till he hears of a new socialist paper crushing operation and pays them a visit he feels that he is doomed.  A man of old tradition witnesses this new era and knows that times are changing and moving on fast, unsure if he can keep up.  He fears that now more than ever is the respect for the art behind the production of bring a book together is lost.  A soulless under appreciation may never be restored or shared at the same gratitude that he does.  Such as the same fear held in some people about fine art and media art treading on what some may worry may be too kitch or kamp.