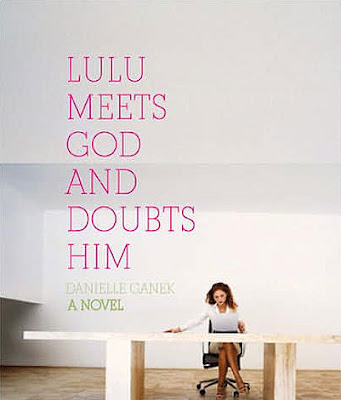 This insider story about the New York art scene circles around Mia McMurray, a receptionist at the Pryce Gallery in Chelsea.  The novel begins in a typical art show, shedding light on the types of New York’s most “prominent,” and the grotesque amount of money spent on the art that they may not even appreciate.  The contrast of Mia’s timid awkwardness to the high sophistication of the art bidders and the rest of the art scene around her lead this story to be satirical in its views of the gallery world.
The auction is highlighting a work by a one armed artist who calls himself Count Jeffery Finelli.  His piece that is generating millions is of a young girl whose eyes follow you as she holds a smaller painting and a paint brush in her hands, (perhaps calling on previous work in art history where the painter paints himself painting, as the subject is his niece and resembles the artist.)  The painting is called LuLu Meets God and Doubt’s Him.

The auction is taking place after Jeffery Finelli is run over and killed.  After this, the painting that was supposed to only go for 75,000 now sells for 4 million.  Mia wonders throughout the novel if these people who are spending millions on these pieces of art really know the difference between trash and treasure.  Art from emerging artists is what is in highest demand, but after the artist’s death, the demand is even greater.  This fact exemplifies the book’s theme that the galleries, the bidders, the curators, the artists themselves, are perhaps not about the art, but the culture of it all.

While the book goes through the events of the artist’s death, his followers “mourning” him, the young Mia falling in love, even the real LuLu the artist’s niece joining the art scene, the painting remains the center of the story.  Possibly mimicking what art is for different people this painting comes to mean different things to all of the characters.  Before the artist’s death he explains that the piece is “about creative endeavor,” and “how we meet God through creative acts.”  Even furthering the paintings omniscient presence throughout the novel.

This story does shed some inside light into the New York art gallery scene, which seems to have a vocabulary all its own.  For instance, the gallery receptionist’s are called “gallerinas.”  The description of which is a stark contrast to Mia, the timid forgettable girl who smiles almost too often.  The gallerinas are to be snotty and with an attitude, rolling their eyes at simple questions like the pricelist, or even the abhorrent question of where the bathroom is.  They are thought to be gorgeous and in the highest fashion, but Mia regrettably does not fit into any of these descriptions, making her the relatable underdog of the story.  Another term is prominent, instead of calling the guests who spend thousands upon millions of dollars on the art shown in the galleries, stupidly rich, they are called prominent.  An amusing aside about the author’s insider look into this scene is that Danielle Ganek  herself and her husband are among the more prominent in the art scene, which sheds some humor in the story when she is remarking on their ridiculousness.  From this term sparks a phrase that to the high class of New York, contemporary art and its sale is the new cocaine.  So franticly desperate to own it, Mia sits on the side lines watching it be bid away.  She leads the reader to wonder if the only people who really appreciate the art for what it is, rather than just another fix, are the people who could never afford it.

I believe the arguments of the book are both sound and effective in that while Ganek makes the characters human, she makes them so in both good and negative light.  Even the protagonist seems slightly swoony over the art as well as her love life, the curators of the museums are arrogant and stubborn, the bidders are crass in their lack of appreciation for what they spend millions on, and the artist’s themselves seem rather naive.  In addition as stated, Danielle Ganek and her husband, a Guggenheim trustee, are among the “prominent,” in the art world, validating her insider satire.  However what I found most fascinating is that even though the entire novel and all its characters are surrounding this painting, it remains that it is not about the art. The subject is about the people surrounding the art and how this shapes the contemporary art world.