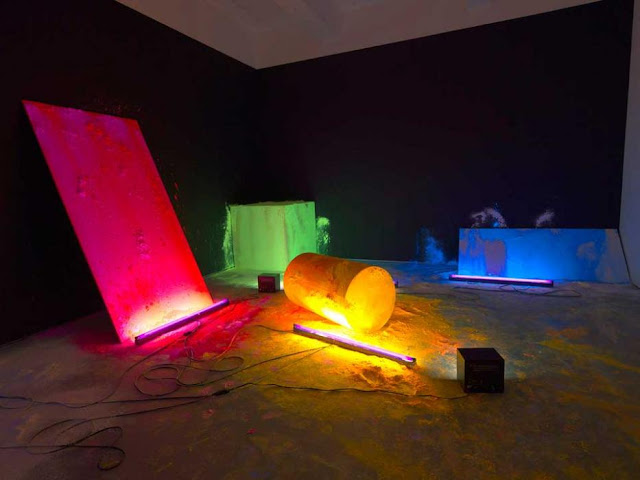 Dis-play II, Sonnier, 1970
This book is filled with creations of Sonnier starting in the year of 1970 and ending in 2001. Each installation uses modern technology in some shape or form to emphasize light. The book is somewhat a time line of Sonnier’s progress as an artist. In his earlier works, his installations are smaller and much simpler than his works found near the end of the book. In every single work, light is the main focus. The first few installations contain neon tubes which are twisted and displayed in a particular form on the wall. He then progresses to incorporate microphones, speakers, telephones, and televisions. In these installations the viewer is an active participant. 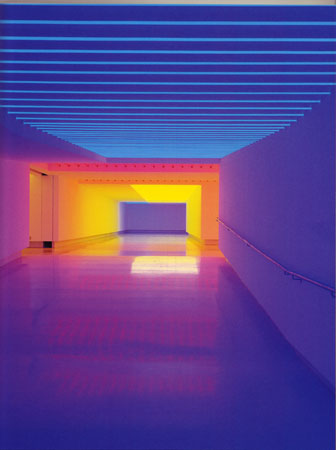 Verdindung RotBlauGelb, Sonnier, 2001
Verbindung RotBlauGelb, which was made in 2001, is one of Sonnier’s huge successes. This is part of the underground system of passages in the Munich Re Group headquarters. The hallways are filled with red, yellow, and blue neon tubes. “Their intense hues subdivide the single sectors into imposing colored spaces. When these sections meet, overlaps occur that result in a variety of color blends (Ehrenfried, 38). Ehrenfried discusses the history of light in art which Sonnier has learned from. The stain glass windows used in gothic cathedrals is the first time this light source was used in architecture. Also advertisement like those found in New York Times Square or Las Vegas use lights with color to bring attraction to a business. Sonnier took these ideas from the past and morphed them into his own. In this installation he has turned color into volume. Each color hue created a space in the hallways. This is another example of Sonnier’s work where the viewer’s are active. Each viewers “perception changes with movement” as they walk down the halls made of color.
Another addition to the Munich re Group office building is Sonnier’s reconstruction of the “Sud 1” building. The challenge of this architectural work was to design around the old original building, while at the same time creating a “jewel” for the city. Every wall is made of glass plate, making “all work places provided with natural light” (Stock, 54). 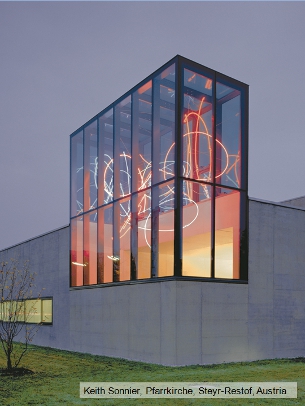 Tears for St. Francis, Sonnier, 2001
Above shows the parish church of St. Franciscus in Steyr, Australia with Sonnier’s installation “Tears for St. Francis”. He was commissioned to add onto a cubic Catholic church by creating a symbol for the church. Sonnier used the same “loop of space” which appear in his older works(see picture below) by doing 12 neon loops, in three different colors in a glass cube. This light fixture brightens the whole church as well as the surrounding neighborhoods. 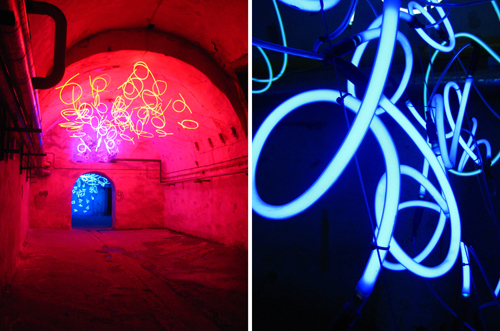 Tunnel of Tears and Fallen Tears, Sonnier, 1997, 1999
This book led me through Sonnier’s artwork, starting with his beginning works and ending with his professional works that can be found in public facilities. I love how his work in the 70’s reflects his work which is found now in the 2000’s. His progress as an artist is impressive and I enjoyed seeing his earlier ideas transformed into huge masterpieces. This book leaves out any talk of religion when dealing with the Catholic Church, probably to remain open to any reader who may be of a different religion. His work tremendously impacts contemporary art. The use of neon lights are found everywhere in the world today. Whether at a night club or riding in a car, the probability of seeing a light fixture is very likely. Sonnier did not accept that lights were just made to help us to see, he changed their usage and made them into artwork.