REVIEW I The Artist at Work, Exile and the Kingdom, Albert Camus, Alfred A. Knopf Inc., 1957 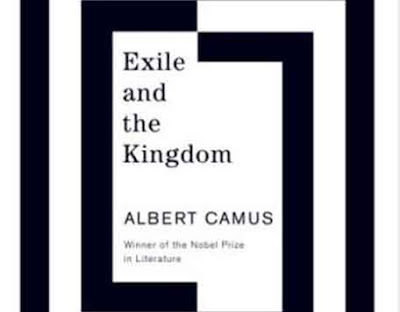 The artistic process takes place within constant reverberation of the movement and society of the time, with great momentary reflection to the artists of the past.  The short story The Artist At Work of Exile and the Kingdom by Albert Camus, is a small, but profound excerpt of Gilbert Jonas's rapid rise and decline within the art community of his day, with a great item of the story developing the balance of the artist alone, versus the mesh of artistic influence.


The beginning finds Jonas at the start of his discovery, or perhaps the rise of his star. Jonas attributes all of his success to his star, or luck, never actually owning his rise or decline within in own self or efforts. Here he finally finds his sole vocation as a painter, earning just enough to provide for his wife and three children.

His studio space, located within the main room of their quaint apartment is soon thronged with first friends and then followers, each with very defined opinions of Jonas's work, and seeking compliments for their own.

Yet the vaster the numbers of his new 'friends', all always talking of Jonas esthetic, or the current artistic failures of the day, the more he learned of the artistic community, the less and less he found himself working. A result at first, of the constant calls from contemporaries, the famous, fan mail, but soon even in rare times of solitude he found his brush idle and mind absent, now more a dreamer than a painter.

Jonas was deemed 'finished' by his contemporaries with the governments commission for Jonas himself to be painted, a work titled 'The Artist at Work'. Soon after the critiques agreed- he was not only outdated, but overrated. While he had felt at loss within his work, societies reflections drove him deeper to his decline. He simply waited for his star to shine again.

During this short timeline, Jonas withdrew his studio space deeper and deeper within the apartments limited rooms, searching for solitude. At the break of his booze binge, where he spent a great deal of his time searching for answers within his taken mistresses, he built a narrow, deep and dark loft within the hallway where he confined himself for the remainder of the story.

Here, in the darkness, he meditated, waiting for his star to rise once more, rarely eating or sleeping. Finally, after a long period of reflection he was ready to work. For two days he worked, worked until he was exhausted, spent, with no intention of ever working again.

Finished he rose, turned out his light, and behold! He saw his star begin to rise. No sooner had he seen this than he fell.

While the doctor assured Jonas's family he would recover, his only close friend, Rateau examined his final work.

The canvas was completely blank, besides a single word scribbled in the center. So small it couldn't be determined whether it read 'solitariy' or 'solidary'.


This was seemingly one of Jonas's only, and greatest reflections. Where does the artist and their processes lie and develop? Is it first and foremost from the lone self, within intimate reflection. Or is the continuous evolution of art over the decades derived from the constant push and pull of an artist's surroundings and community. Art is born from the altered reality we perceive, and without this reality we would be, and be going no where. Yet without our solitary reflections all of man's creations would simply be repetitious reproductions.

Art, as with most things, grows within a balance. Finding that balance is the only way to ensure steady success, lending understanding to just why Jonas failed. It was his wife who instigated museum visits, and kept him updated on the ever changing art environment. Yet despite her efforts, he failed to take anything from his fellow contemporaries, rendering these outings fruitless. Only to himself would he admit how little understanding he could grasp of his own esthetic, much less others. His lack of opinion left him with lack of conclusion, therefore leaving evolution of his work far out of his possibilities. Though solitary reflection is dire to any ones work, and he loved solitude, he lacked the reflection. He instead, waited for his star to rise once again.

Once discovered, he was surrounded suddenly and constantly by others contradictory opinions, yet never formed his own. He set aside little, to no time for solitude so he could truly work, and while his new friends interested him greatly, he never reflected enough to find anything meaningful from their interpretations. His output slowed from constant distraction, yet he accepted nothing from his found community into his work.

Within his time of flourish he never tried to find or create intentions within his work, he attributed all his success to his star, instead of analyzing what he was doing right, he just kept hoping his luck would continue.

After his reputation fell he withdrew abruptly into the solitude of his new loft, a polar opposite of where he had just socially been. Not even seeing his family he sat in meditation, waiting for his answer to rise.

The answer never found him, he was left with only the question 'solitary' or 'solidary'?

The story is of great relevance even today, though written decades ago. It cannot give a straight answer for there is none. But it is a lesson to the artist of studio practice.  The balance between solitude and the artistic community is key. One is nothing without the other. Finding the right balance is different for each of us at work. If political activism be the main goal of your work, knowing the current community is your foundation. While an artist with an unending line of self portraits requires far greater self reflection, but must still ask themselves where they stand and what they wish to portray.

Fully understanding your own intentions is the only clue given to any artist. We each find our own path somewhere between solitary and solitary, from deep reflection and slow, always changing understanding.