REVIEW | El Anatsui, When I last wrote you about Africa, Blanton Museum in Austin, Texas 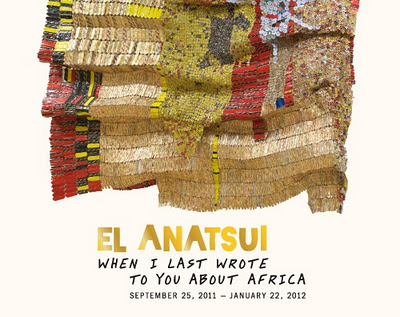 El Anatsui's When I last Wrote to You About Africa exhibition is currently on display in the temporary gallery at the Blanton Museum in Austin Texas. The exhibition covers Anatsui's recent work as well as pieces dating back to the 1970's. The underlying theme of the exhibition is Africa, with pieces that tie together subjects including first contact with westerners, slavery, and the vibrant economic marketplaces of Africa today.

The gallery space is well lit but not particularly bright, with a warm color scheme that complements the reds, yellows, golds, and browns commonly found in Anatsui's work. The most spectacular items on display are the large and intricate blankets pieced together with aluminum drink tops and copper wire that brilliantly reflect light and color. The aluminum pieces have been cut and folded to create different patterns and textures across the entire blanket. Some parts of the the large sheets are tightly woven and opaque, but other parts are more sparse and transparent. Some of the bottle tops have been cut into strips and then looped in to small circular knots, which are then woven together to create intricate patterns. The tapestries are colored with red, yellow, and gold, with bits of green and blue interspersed. Anatsui allows each gallery displaying his work to hang the blankets as they see fit, and here they have been draped and voluptuously wrinkled on the wall to give a more three dimensional effect. At the back of the gallery space there is a wall with a sheet of golden fabric that visitors can fold and manipulate to get an idea of this hanging process. A video on display at the back shows Anatsui explaining that westerners originally brought drinks with them when they first arrived in Africa, and that the Nigerian drink tops serve to link the two histories.

One part of the gallery space has been sectioned off for a piece that is displayed on the ground. Hundreds of brightly colored boxes from African markets are laying on the floor, and when viewed from an angle they have a similar visual appeal as the aluminum tapestries. Each box has colorful labels glued to it from products that might have been kept in them. The text that goes along with this piece suggest that the boxes represent the vibrant markets and plethora of products sold in Africa.
One particularly powerful piece is entitled Akua's Surviving Children. Various sized logs of driftwood have been stood upright to represent human figures, with smaller driftwood pieces nailed to the top as heads. The driftwood represents slaves killed by drowning in the ocean after being tossed overboard from slave ships. The driftwood was found on the shore, as the bodies of the slaves were. Anatsui has burned the heads of each of the figures, in a symbolic ritual of cleansing.

This exhibition links African and western cultures and seeks to reconcile the wrongdoings of the past through ritual and shared cultural items. I would highly recommend it to anyone looking for contemporary art with real meaning and effort put into it. The exhibition will be on display at the Blanton until January 22, 2012.