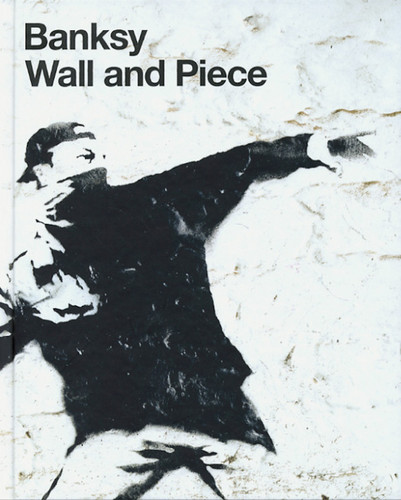 Banksy is a pleasant break from the modern art world, in both his work and his ideals on art.

All artists are prepared to suffer for their work, but why are so few prepared to learn to draw?

Banksy's presence in the art world has been both secretive and outlandish, from personally sticking his paintings in galleries to exhibiting his own shows, indoors and outdoors. Banksy's work is always seen in the spotlight, a feat he doesn't seem to take lightly in his book Wall and Piece. Calling graffiti "unspoilt by progress" and coining the term "Brandalism" as any advertisement that gives you no choice. Banksy definitely presents some points that everyone should read.


Whether it be killing Van Gogh's sunflowers and blaming the petrol station or trashing a Monet painting it doesn't appear hes bashing the artists of the time as much as hes bashing the modern era. Thats not to say artist are exempt from harassment, or anything else for that matter.

Banksy has no quarrel with speaking his mind, as he makes clear on one of the first pages of the book, and follows it up with "so this won't take very long." Calling graffiti one of the more honest art forms available because of its lacking of both elitism and hype. He goes on to explain how the people who run our cities don't understand graffiti because it doesn't make a profit, but graffiti that makes a profit is only advertisement which Banksy describes as the true defacement of our neighborhoods.

Imagine a city where graffiti wasn't illegal, a city where everybody could draw whenever they liked. Where every street was awash with a million colours and little phrases. Where standing at a bus stop was never boring. A city that felt like a party where everyone was invited, not just the estate agents and barons of big business. Imagine a city like that and stop leaning against the wall - it's wet.


Banksy's illegal endeavors are as controversial as they are diverse, re-emphasizing the point that no one is exempt from judgement and harassment. Making Banksy an internationally acclaimed artist and criminal. Regardless of the legality of his works the points brought up in his book are clear and lightly worded. Making for an easy and very interesting read.

When the time comes to leave, just walk away quietly and don't make any fuss.