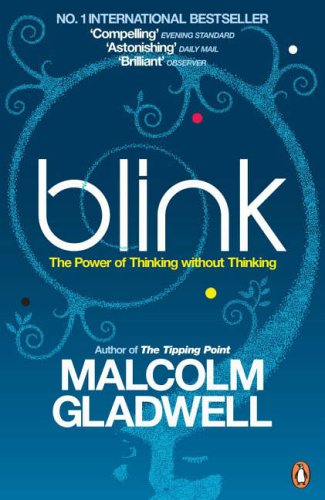 The book, Blink, by Malcolm Gladwell does not directly address contemporary art.  However, it's context should surely be considered by any artist today.  Blink is a social/statistical text which discusses the many aspects in which human beings use their first impressions and immediate gut reactions to gauge situations.  For budding artists, work may often be dismissed at first glance.  Some, however, exhibit that special something that pulls the viewer in for a closer look.


Malcolm Gladwell's books are influenced heavily by social sciences and statistics.  They explore multiple examples of various social phenomenon, in accordance with scientific research and data on the subject.  In the introduction to Blink, "The Statue that Didn't Look Right", Gladwell describes a scene where the Getty Museum in California buys a Kouros statue for ten million dollars.  However, when an expert, Evelyn Harrison, saw the statue for the first time, she instantly knew it was a fake.  It had fooled everyone else, including other art experts, so how did she know so quickly that the Kouros was a fraud?  The fact of the matter was, she didn't know how she knew, but, she was right.  Rigorous testing revealed the truth- the statue had been made in modern times.  What Evelyn Harrison had experienced was what Malcolm Gladwell refers to as "intuitive repulsion".  This book is about the psychology behind first impressions and how they affect the decisions we make.  Ultimately, the book discusses ways in which people can enhance their decision making skills.