Renowned Cajun artist George Rodrigue is most commonly know for his Blue-Dog paintings, inspired by his long-deceased childhood companion, as well as his paintings of Cajun culture such as bayou and swamp landscapes.  When Rodrigue began his Blue-Dog paintings in 1984, he had no idea that they would consume his art for over two decades. Through his own expressionist style of painting, Rodrigue developed his own renditions of familiar Cajun legend and folklore surrounding the myth of the loup-garou (werewolf), using his dog, Tiffany as his subject. I became aware of  Rodrigue’s work through my own Cajun influences and background, having been born in the Acadiana region of Louisiana (the same area as Rodrigue himself) or more commonly know as Cajun Country, where his art is well-known.

The massive quantity of Rodrigue’s Blue-Dog paintings Rodrigue has produced can somewhat be compared to Andy Warhol's Marilyn Monroe prints, with the idea of obsessing over and image and having a strong desire to duplicate it. His painting style in this series consists of flat color forms that form some kind of bayou or marsh background with the Blue-Dog, simply rendered and placed somewhere in the scenery. As the series goes on over the years, she is placed in other various settings and venturing out of Cajun country and into brightly colored, surrealistic landscapes, in costumes, inside a home and more recently with nude women.


His dogs peer out with wide, yellow eyes, and sit in practically the exact same pose in every painting and continually casts the same eerily remarkable gaze. Rodrigue’s painting approach can be considered minimal, yet bursting with color and perhaps on the childish side of how he renders his iconic Blue-Dogs.


Even though Rodrigue had original intentions of being a graphic designer (which reflects through out his painting style) in the hustle and bustle of Los Angeles, he found himself being drawn back to the culture and vitality of Louisiana.

It was in 1988, during an exhibit of around 70 paintings in Los Angeles, the loup-garou became the "Blue Dog," when Rodrigue overheard a patron describe his collection of loup-garou paintings as blue dogs. "When I heard the blue dog, it clicked, and I dropped the Louisiana references and decided it was the 'Blue Dog,'" said Rodrigue. "After 2-3 years, I realized that I could use the 'Blue Dog' to comment on life today. When we are looking at the dog for answers, it is looking at us. It is a communication about where we are along the journey. By putting elements with it that say something contemporary, it becomes a contemporary comment on society." 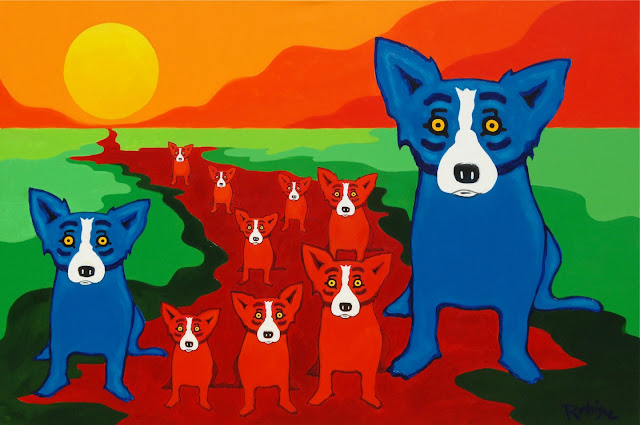 Having seeing Andy Warhols' first one-man exhibit at the Ferus Gallery in Los Angeles in 1962, Rodrigue steered away from Warhol's pop art semblance and fabricated his own style. With the growth and transformation of the Blue-Dogs, he has now somewhat reverted back to the pop art feel of the Warhol era with his imagery, graphic quality and intense colors.

"As I moved on, I got back into the trees and back into the brighter colors and now it's all over the place," said Rodrigue. "It's just whatever I want to do. It's just a comment on life today."

It may also seem that Rodrigue's painting titles are emphasized alongside the works and uses the them to provide insight into the human condition.As for the dog itself "It is difficult to define the allure of the Blue Dog, but the fact that it captures the imagination is undeniable."

Great blog post, I found George Rodrigue interesting as well. I loved his color palette and almost this color blocking technique to achieve his paintings. It is interesting how he used his blue-dog within almost all his paintings. It makes it fun to try and play a kind-of where's waldo technique. I would have loved to see a more diverse post of paintings he has done with the blue-dogs, but otherwise I found him very interesting.